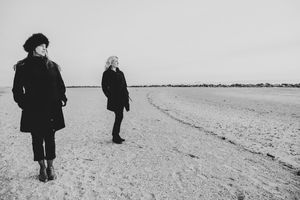 THE NINE SEAS DEBUT WITH HARMONIOUS ‘DREAM OF ME’

This writer recalls the scene on New York’s Lower East side twenty years ago when Fiona McBain and Liz Tormes began singing together, witnessing those NYC shows of Ollabelle at small venues, like The Knitting Room, Banjo Jim’s and the club from which the duo take their name, 9C.  Yes, there’s a heap of history here and a nod to singer-songwriter Laura Cantrell, who introduced me to Tormes, who had just recently moved to New York. You may recall McBain as the singer with the Aussie accent singing alongside Amy Helm in Ollabelle. Tormes may be less familiar but she and McBain were in a past band with Ollabelle alum Glenn Pascha called Big Bright. Tormes released her own excellent solo album Limelight, which enabled her to tour Ireland and England with Teddy Thompson. Twenty years ago, McBain and Tormes performed under the name Fizz before changing the name to the current, as a nod to the venue that shaped their early partnership.

The album was co-produced with southern singer-songwriter and multi-instrumentalist Jim White, who played banjo, piano, Jaymar piano, guitar, and various percussion. Musically, the duo mostly travels through a similar southern gospel which drove Ollabelle, music that was foreign to McBain before coming to the states, that she learned from Tormes and her previous bandmates. Some are the first songs they sang together in Fizz – “Midnight Blues” and “Trials, Troubles, Tribulations.” There are two versions of each of those on the album – a White version and a stripped-down guitar and vocal version with two voices and two guitars, which is the way they perform live. Other notable musicians are Glenn Pascha from Big Bright on keys for five tracks, J. Walter Hawkes on trombones, and Olivier de la Celle on electric guitar and bass for the first version of “Midnight Blues.”

Deep country standards “I Will Never Marry” and “Sea of Heartbreak” sit alongside the murder ballad, “Down in the Willow Garden,” the kind that Tormes was singing with The Misery Trio at 9C when she first met McBain, who was then singing in jazz clubs. Some of these are also early originals like “Am I Still Your Demon?” (Tormes), and “Go To Sleep,” Where He Rests” and “I Really Want You” (McBain). “Am I Still Your Demon?”, the opener, describes an imagined conversation with an old lover, as Hawkes’ trombone arrangement augments the melody. “Go to Sleep” honors a close family member who took her own life. Sadly, “Where He Rests” was written after 9/11 and is set through the eyes of a firefighter’s wife. “I Really Want you” was inspired by a long-ago failed romance. We should add that since 2008 McBain has been married to former Ollabelle and current Chris Robinson Brotherhood drummer Tony Leone who sits in on drums for “Down in the Willow Garden.”

Jim White adds a haunting banjo, drums, melodica (Jaymar piano) and other eerie sounds to “Trials, Troubles, Tribulations” an early song, rendered in the two versions.  Tormes says, “I learned this song from a Joe Vai record. The lyrics are quite terrifying and highly reminiscent of my junior high days when I attended a private Christian school in the Bible Belt. ‘Hellfire and damnation’ was a favorite talking point in our daily bible class.” Fiona adds, “I was not from a religious family, but my atheist father studied religions form all over the world and would often remark on the Book of Revelations in the Bible. As a teenager, I chose to go to church with my friends because I loved the music, but I was always fascinated by the sermons that told of the suffering which awaited non-repenters…’Trials” as a song is direct and relentless. The first time I heard it performed was when Elena Skye sang it with The Demolition String Band at bar 9C, she sang the lower part which added to the intensity of the song. When Liz played it for me, I took the lower harmony and tried to sound as convincingly as frightening as possible.”

Seldom will you hear two voices that blend so well. For those looking for more music from Tormes and McBain, you may want to consider The Big Bright. It’s very different fare, ‘80s pop songs rendered with Ollabelle keyboard ace Glenn Patscha (Rosanne Cash). I Slept Through the 80s was a dreamy homage, filled with lullaby arrangements of power ballads, practical as both McBain and Patscha had recently become parents. McBain also performs in a soprano/bass duo with Mike Viceglia, Then There Were Two.

The sound of McBain and Tormes together doing their own as well as vintage material, is a long time coming. Let’s hope it continues.